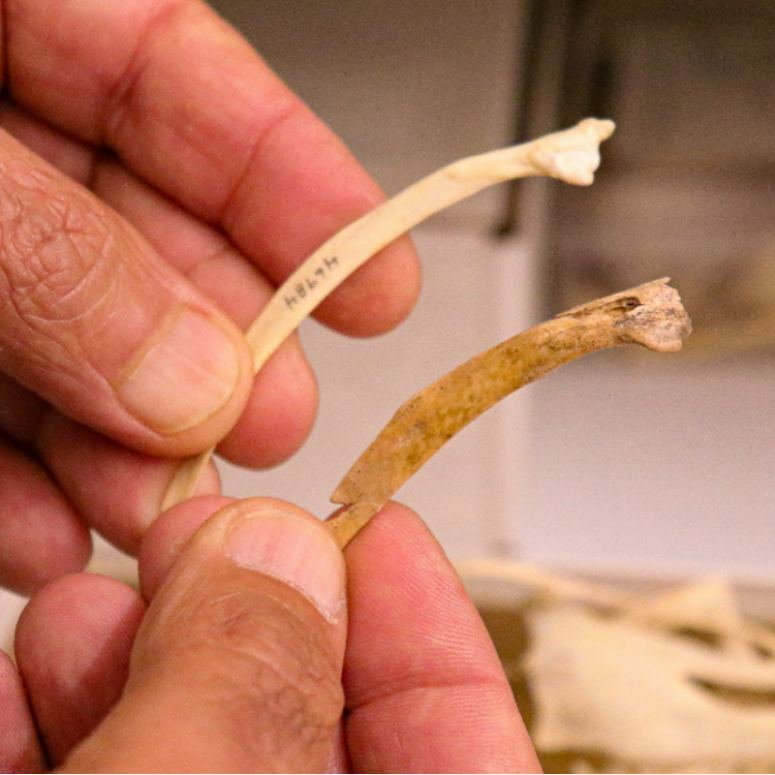 Fifteen hundred years ago, steady water flowed through what is known today as Spring Valley. A lush landscape surrounded the Kumeyaay village of Netí, where people hunted and consumed a variety of local animals including California quail, rabbits, and coastal fish. Back then, eastern San Diego looked much different than it does today, but the warm, Mediterranean ecosystems were more or less the same.

Why then, was the scapula of a sea duck—known mainly from the arctic circle—found in an old refuse pile from the Netí village?

“We now have more evidence to bring to the table when it comes to this bird’s historic range,” says Aharon Sasson, co-director of the San Diego Zooarchaeology Lab, which operates from The Nat’s Birds and Mammals Department. “For an animal so rarely seen this far south, this discovery is certainly worth discussion.”

The bird bone was unearthed along with nearly 5,500 other bone fragments from a midden, or refuse heap, located near the Bancroft Ranch House in Spring Valley. Electrical construction in the area prompted the excavation and Sasson’s team, the only zooarchaeology group in San Diego County, was asked to assess the animal remains. They identified 32 different animal groups, all of which are commonly found in San Diego’s terrestrial and marine habitats today—except the arctic sea duck.

Along with Curator of Birds and Mammals Philip Unitt and the Zooarchaeology Lab’s co-director Susan Arter, Sasson recently published this unique discovery in the Pacific Coast Archaeological Society Quarterly. 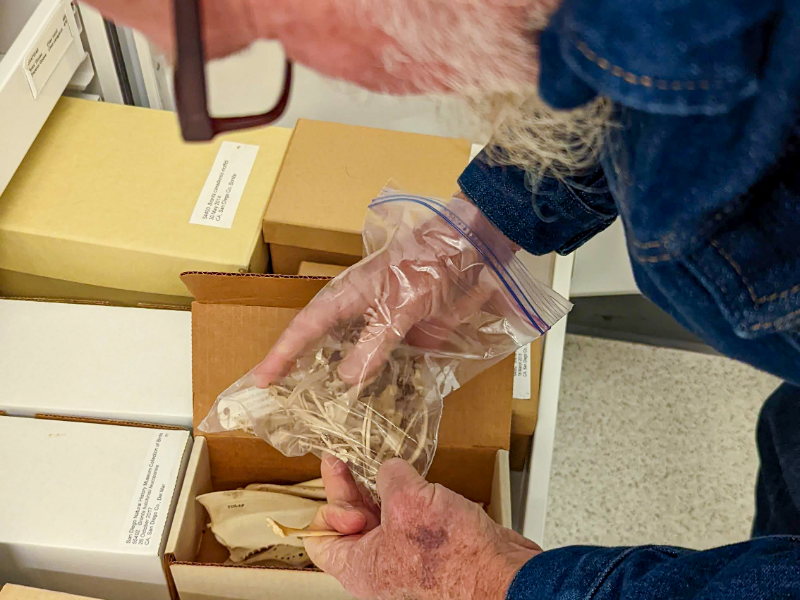 Searching for the skeleton key

It took the lab and their volunteers months to narrow down the scapula’s identification, says Sasson. They weeded through skeleton after skeleton in The Nat’s collection, which represents 90 percent of the world’s bird families.

“For weeks, none of us could find a match, but I couldn’t let it go,” says Sasson. “The Museum’s collection is so diverse, I knew we should be able to find at least a matching genus.”

In an initial screening, volunteer Kendall Abady suggested an eider duck as the closest match.

“That was a huge red flag for me. Eiders are virtually unheard of in San Diego,” says Unitt. “There’s almost no literature on bird scapula identification, so I said, ‘Okay, we have to do this right, we have to make a systematic identification key.’”

After several more weeks of peering through magnifying loupes and making meticulous comparisons, Unitt came to the same conclusion: the bird buried in the Netí midden was indeed a large eider duck.

“It felt like I had just gotten a lifer,” says Unitt. “Birders love to find rare birds, even if it’s a 1500-year-old record.”

From the bone’s morphology alone, the team couldn’t confirm whether it was a spectacled, common, or king eider. However, the king becomes far more likely when you take modern sightings into account: California has zero confirmed observations of the spectacled, only three of the common, but 46 of the king. 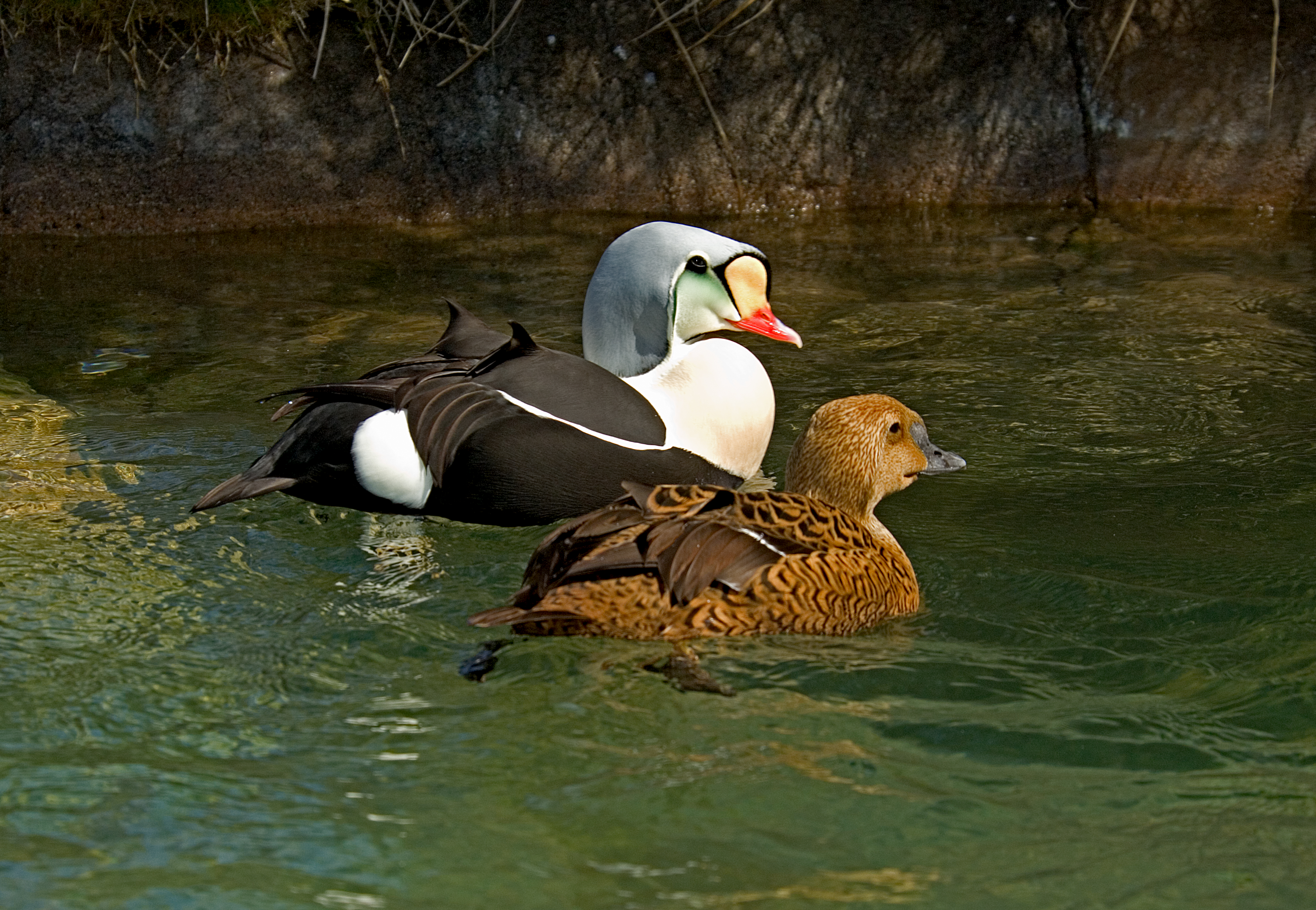 What is a king eider and why was it in Southern California?

A duck originally described by Carl Linnaeus himself, the male king eider (Somateria spectabilis) boasts beautiful breeding plumage, while the female is cryptically patterned to blend in with the arctic tundra while she nests. King eiders winter mainly in Alaska, Norway, Russia, Greenland, and the northeastern U.S., spending the majority of their lives bobbing in the surrounding frigid seas.

On rare occasion, these ducks turn up in Northern California. In 1982, during an especially warm winter, seven of these birds ventured even farther down the Pacific Coast. Discovered by local birder Mary Beth Stowe, a single male made it to the Imperial Beach Pier, the only confirmed king eider ever recorded in San Diego County.

“In general, El Niño conditions are bad for water birds,” says Unitt. “Without the usual coastal upwelling in winter, seabirds struggle to find enough food, which can lead them to look elsewhere.”

Referring to data in the San Diego County Bird Atlas, Unitt says San Diego saw higher numbers of other northern migratory water birds in 1982-83, including the mew gull, horned grebe, and common loon. The grebes and loons had to stall their migration due to repeated storms.

Fifteen hundred years ago, when the Kumeyaay people deposited the eider scapula into their midden, it’s possible that climate conditions were similar, or perhaps it was cool enough then to encourage the birds further south.

Connecting the dots across time

Not only does this discovery open up new questions about our region’s climate history and the opportunistic hunting habits of the Kumeyaay people, it also establishes the beginning of a pattern. Eiders rarely venture south of our state’s northern border, and this discovery suggests their southern range has hardly changed in over a thousand years.

“To me, science is about seeing anomalies and patterns,” says Sasson. “It’s about connecting the dots. The king eider from 1982 is one dot. Our new finding is another dot. Now we can draw a line between them and understand this species, this indigenous community, and our region’s climate a little better.”