How many Tyrannosaurus rex walked the ancient world? About 2.5 billion. 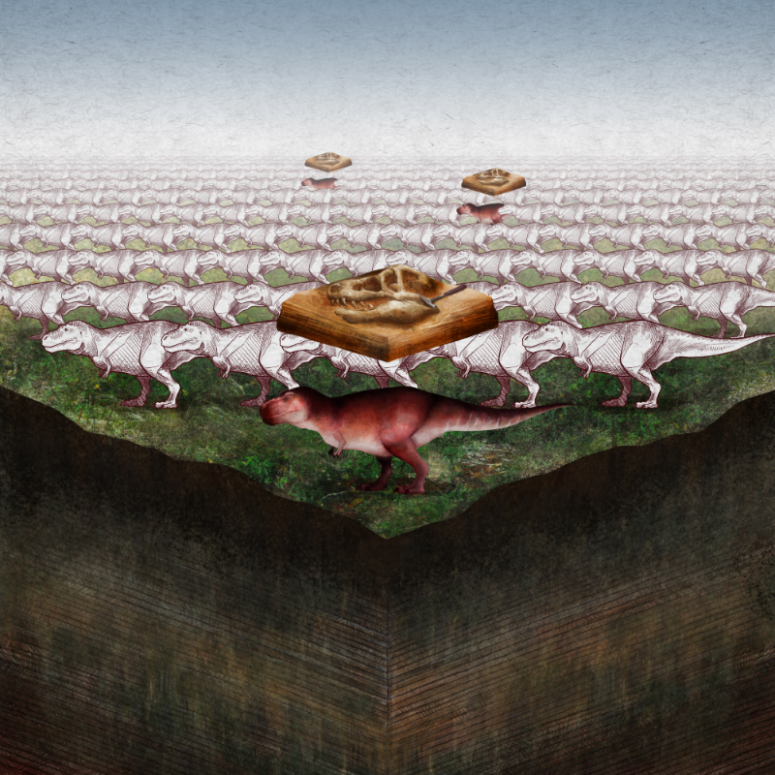 Tyrannosaurus rex is one of the most iconic and extreme extinct animals—it’s a dinosaur that has captured popular imagination for years. But how many were there?

A new study published today in the journal Science adds to our understanding of this dinosaur’s life and its time on earth. Authors of the study, including The Nat’s own Paleontology Postdoctoral Researcher Dr. Ashley Poust, estimate that about 20,000 individuals roamed the earth at any given time. It persisted for approximately 127,000 generations, and the total number of T. rex that ever lived was about 2.5 billion individuals.

T. rex lived in western North America at the very end of the Late Cretaceous, about 68 to 66 million years ago. Paleontologists have found most T. rex fossils in states such as Montana, Wyoming, North and South Dakota, and some areas of Alberta, Canada. The Hell Creek Formation in Montana is an especially prolific area for fossil recovery.

Of course, the number of fossils that have been discovered is miniscule compared to the number of individuals that actually lived—this is true not only for T. rex but for any species. By using population biology—applying mathematical models to a particular species—scientists were able to more accurately estimate dinosaur demographics and the chances of finding an extinct animal in the fossil record.

This helped scientists deduce that we have found one out of 80 million T. rex that ever lived. In other words, every T. rex fossil that has been discovered represents 80 million T. rex that lived and died, and were not fossilized or have not been discovered. When looking specifically at areas like the Hell Creek Formation where its fossils are most abundant, that number is one in 16,000 individuals.

The method scientists used with T. rex demonstrates a route for unearthing whole new areas in the biology of extinct organisms. This research also demonstrates the importance of natural history collections, and more specifically the need to collect multiple fossils of the same species. And, learning about past ecosystems is increasingly valuable as we go about learning how populations might best survive environmental change.

Learn more about other paleontology news on our blog.

Image caption: This artist rendering illustrates the few T. rex that have been recovered, emerging from an endless field of the ghosts of those that lived and died without becoming fossils. Illustration by Franz Anthony.