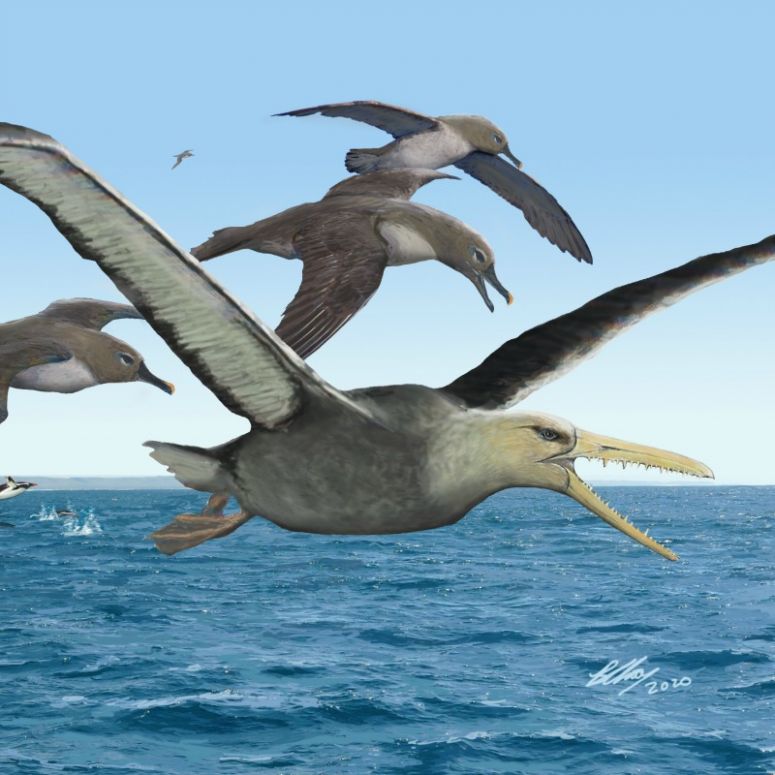 A 50 million-year-old fossil from Antarctica identified as belonging to an extinct group of ocean-going birds called pelagornithids is thought to be the oldest record of truly giant flying birds. The albatross-like pelagornithids also are known as ‘bony-toothed’ birds because of the unique bony spikes that resemble sharp pointed teeth on their saw-like jaws.

“Marine mammals are often the stars when we think of marine vertebrate communities in the past,” said co-author Dr. Ashley Poust, the James R. Colclough Postdoctoral Fellow at the San Diego Natural History Museum, “but they weren’t the only big predators around.”

Peter Kloess, the lead author of the study published today in the journal Scientific Reports and a University of California Berkeley graduate student, explained; “Our fossil discovery with its estimated nearly 20-foot wingspan shows that birds evolved truly gigantic size relatively quickly after the extinction of the dinosaurs, and ruled over the oceans for millions of years.”

The fossils include a portion of the lower jaw with parts of the bony ‘teeth’ preserved, which would have been up to an inch tall when the bird was alive. The section of jaw came from a very large skull that would have been up to 2 feet long. Using measurements of the size and spacing of those ‘teeth’ and analytical comparison to other fossils of pelagornithids, the authors show that this fragment came from an individual as big, if not bigger, than the largest known skeletons of the ‘bony-toothed’ bird group. In addition, part of a foot bone (called a tarsometatarsus) from a different fossil locality on the island is the largest specimen known for the entire extinct group. Both fossils suggest the extinct species represented by the fossils had wingspans of between 5 and 6 meters (up to 20 feet).

Poust and Kloess worked together with fossil bird expert Dr. Thomas Stidham, a researcher at the Institute of Vertebrate Paleontology and Paleoanthropology in Beijing, China. Each of the authors had spent time in the collections of the University of California Museum of Paleontology (UCMP) where the fossil is held, and been captivated by the pointed tooth-like projections on the fossil jaw. When they realized their common interest, it became an obvious collaboration.

“We each brought different skills and interests to the project,” said Poust. “But I also think it was just a treat to think about the strange communities of ancient Antarctica. I’m not sure we’ll ever get to go there, but opening those drawers and seeing a whole Antarctic ecosystem, from extinct fish to fossil penguins, was the next best thing.”

Fifty million years ago, Antarctica had a much warmer climate and was not the forbidding icy continent we know today. Though there were some extinct land mammals like marsupials and distant relatives of sloth and anteaters, coastal Antarctica was a Kingdom of the Birds. They occupied the land, sea, and air and were huge in each domain. The polar region millions of years ago was not just the playground for early penguin species; extinct relatives of ducks, ostriches, petrels, and other bird groups flourished as well. The new research documents that these extinct predatory large- and giant-sized ‘bony-toothed’ birds were part of the Antarctic ecosystem for over 10 million years, flying over the heads of penguins swimming in the rich southern oceans. Dr. Stidham pointed out that these birds had wings that would let them be effective over long distances, allowing them to fly “widely over the ancient open seas in search of squid, fish, and other seafood to catch with their beaks lined with sharp pseudoteeth.”

Giants like the bony-tooth birds described in the new paper weren’t limited to Antarctica. Specimens in the San Diego Natural History Museum’s collection show they were present here in southern California at the same time, when San Diego was a lush forest. “These were some of the most successful birds of all time,” said Dr. Poust. “Sure, they were big, but they also soared over all seven continents and lasted for millions of years. Our time is actually weird for not having them. It’s really too bad they couldn’t have lasted just a little bit longer—I would have loved to see one, to see how they fit into an ecosystem. Though I guess those teeth are pretty scary, so maybe just through binoculars.” 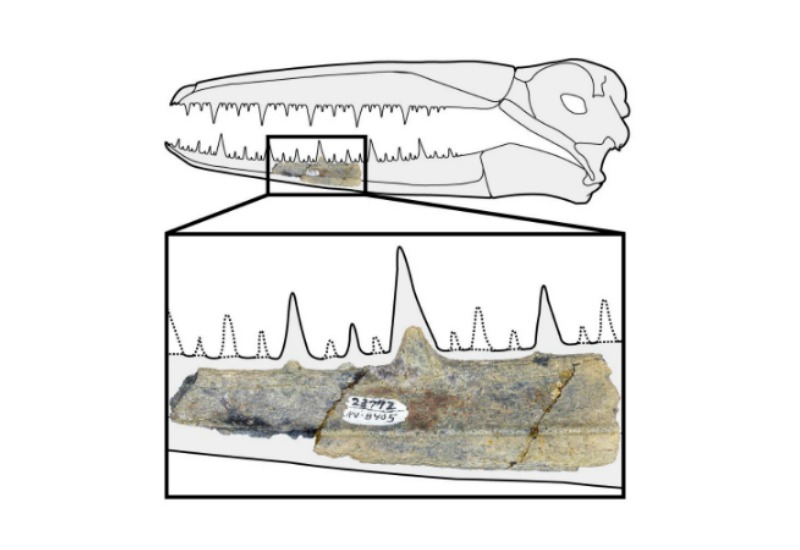