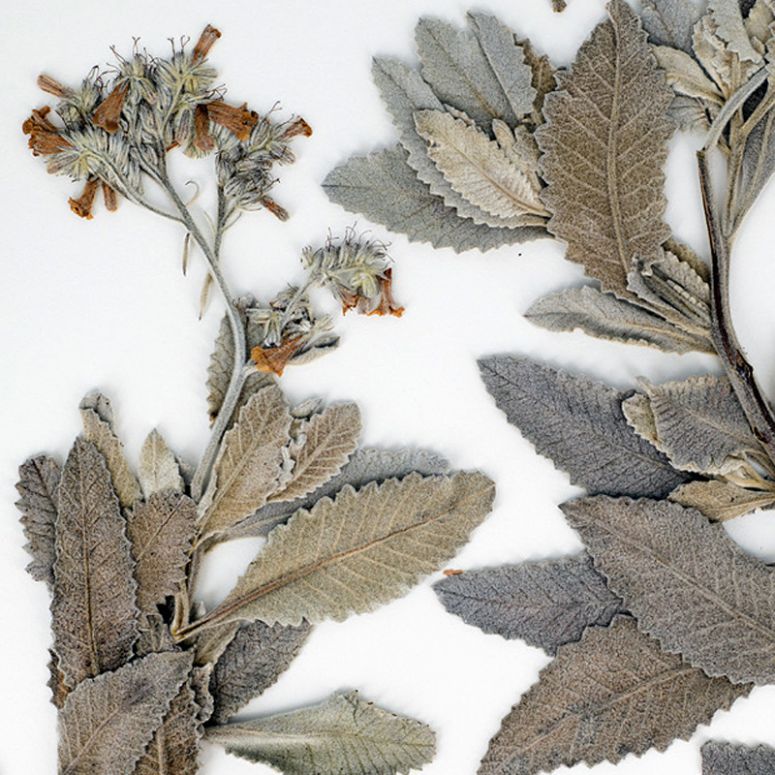 The coolest of the last decade from The Nat

In the spirit of the decade-spanning Top 10 lists that abound in our collective news feeds, we asked each of our curators to nominate two to three of the best specimens that were collected or discovered in the 2010s. We got 17 nominations, and museum staff and volunteers voted to narrow the list down to “The Top 10 Specimens of the 2010s.”  They include specimens that tell us about the past, specimens that give us hope about the future, and, of course, specimens of species new to science. These discoveries show that there is still a lot we don’t know about the nature in our backyard. Counting back from 10 without further ado…

10. Citizen scientists to the rescue

A Moorish Gecko (Tarentola mauritanica) collected on March 12, 2012 from a house in Pacific Beach, this specimen highlights the growing number of exotic introduced species being discovered in Southern California. The majority of detections of introduced species have come to the Amphibian and Reptile Atlas of Peninsular California through the posts of citizen scientists on iNaturalist. To date, our collections hold three specimens recording its presence in San Diego County, but citizen scientists have posted 24 observations, giving us a better perspective on how widespread the species has become. With citizen scientists and professional biologists working in tandem, we have now documented more than 15 additional species of exotic amphibians and reptiles that have established in the county. Some appear innocuous, but others pose serious threats to our native fauna.

9. A long lost species of milkvetch

This specimen of Astragalus piscinus, a milkvetch in the bean family (Fabaceae), was collected on April 21, 2017 near Laguna Manuela, Baja California, Mexico. As part of an ongoing botanical conservation project to try to rediscover (relocate, document, and assess) lost plant species on the Baja California peninsula, this herbarium specimen is only the second collection of the species in history. The only other known specimen (the type used to originally describe the species for science) was collected by Edward Palmer in March of 1889. Almost 130 years later, we now know this is a very rare species restricted to a small area of sandy soils in coastal Baja California.

8. A sad letter by Lucy Audubon

In March of 2019, our librarian found a letter written by Lucy Audubon, wife of John James Audubon in 1864. Archival collections in libraries can contain surprising elements in unexpected places. While looking in our A.W. Vogdes collection of papers, we happened upon this prize. This letter, written in 1864, is important not only because of Audubon’s fame as the greatest American ornithological illustrator. It also speaks to the tragic fact of his family’s falling on hard times after his death, since his widow was in effect homeless at the time this letter was written.

Our researchers collected a species of Dune Scorpion (Vejovoidus longiunguis) on November 9, 2019 in the dunes south of San Juanico in Baja California Sur. This scorpion specimen documents a previously unknown population well-separated from any of its kin. We think these dunes around the appropriately named "Scorpion Bay" might have the greatest density of scorpions of anywhere on the planet. "How dense?" you ask. Our preliminary research indicates about 1.6 scorpions per square meter. If your bedroom is about 10 feet x 10 feet, that would be about 15 scorpions on the floor.

The Horned Lark (Eremophila alpestris) is known for its wide variation in plumage color across North America. Various populations of this terrestrial bird of open country tend to match the color of the ground. For example, in eastern Oregon where the soil is derived from volcanic lava Horned Larks are dark, while in the sandy Sonoran Desert they are pale. But recent specimens from the desert’s Imperial Valley—like this specimen collected on August 18, 2014—are darker than the population that lived there decades ago. In our study of the Horned Lark in this area, Nick Mason and Phil Unitt proposed that this shift was driven by natural selection. After the Imperial Valley was converted from desert to farmland, and irrigation and cultivation darkened the soil, dark variants were favored over the pale population that formerly prevailed. This represents the first example known among birds evolving different colors within recorded history.

Among the many threats to wildlife is death on the highways. Road-kill is one of the ways by which habitat fragmentation is translated into a species’ decline. One might expect the ringtail (Bassariscus astutus), a carnivore specialized for life among steep rocky slopes and boulders, to run this risk only rarely. But this specimen was hit on September 23, 2017 near Buckman Springs where Interstate 8 passes some cliffs. Highway 67 by Mount Woodson is another spot—at a bottleneck between two patches of ideal habitat—where ringtails have been killed repeatedly while trying to negotiate heavy traffic. To understand the ringtail’s movements and risk in this area, the Museum and San Diego Zoo are collaborating on a study of ringtails trapped and equipped with a location-recording collar.

4. A woodpecker reveals its killer

This White-headed Woodpecker (Dryobates albolarvatus) was found dying at Round Valley in the San Jacinto Mountains on June 25, 2010. Dissection revealed a severe infestation of roundworms (nematodes), and most other specimens of woodpeckers from this area were also infested to varying degrees. European earwigs (Forficula auricularia) were found in the stomachs of two, and this insect is a vector for transmission of nematodes to woodpeckers. The European earwig is now widespread in southern California’s mountain forests, even in the wilderness. Did the introduction of this exotic insect bring or intensify the roundworm infestation of woodpeckers? The White-headed Woodpecker is a species of conservation concern in some areas, and is retracting from the southern end of its range, which is in San Diego County. Woodpeckers’ high incidence of roundworm infestation would never have been revealed without collection specimens. Conservationists have often overlooked it, but disease can be a threat to the survival of any species of wildlife—just ask the frogs.

This specimen of Yerba Santa (Eriodictyon crassifolium) was collected on March 15, 2012 near La Jolla. Many of the California species of the genus Eriodictyon have been used by indigenous groups to treat respiratory and age-related problems. As part of a new collaborative project between researchers at the Salk Institute that are studying Alzheimer’s disease and the Botany department at the San Diego Natural History Museum, the group is using dried leaf material from specimens (like this specimen from La Jolla) that are deposited in the herbarium collection at the Museum to extract plant chemicals from all species and its relatives in order to determine which species have the highest levels of neuroprotection and anti-inflammation. This could be important for new therapies combating dementia.

This specimen of the Cacachilas Wandering Spider (Califorctenus cacachilensis) was collected on October 14, 2014 near La Paz in Baja California Sur. One of the first specimens collected of a new genus and species of large spider, it was collected in a dark tunnel in a long-abandoned silver mine. When officially named in 2017, it made international news with sensational headlines like “Monster spider haunts abandoned Mexican mines.” Much to our curator of entomology’s chagrin, the typical top comment for all those new stories was, “Burn it! Burn it with fire!” Whether you are an arachnophobe or arachnophile, it is difficult not to appreciate the fact that such a large spider has gone unknown in the shadow of one of the peninsula’s largest cities.

1. Sometimes it takes millions of years to discover new species

On September 16, 2010, paleontologists uncovered a complete skeleton of a baleen whale from late Pliocene (~3 million years old) marine sandstones at the San Diego Zoo. While most vertebrate fossils are recovered as single bones, bone fragments, or maybe partial skeletons, the skull of this whale was attached to a fully articulated axial skeleton (cervical through caudal vertebrae and associated ribs) with complete and articulated forelimbs and vestigial pelvic bones. The specimen represents a new genus and species of gray whale (Family Eschrichtiidae) that our researchers are currently naming. 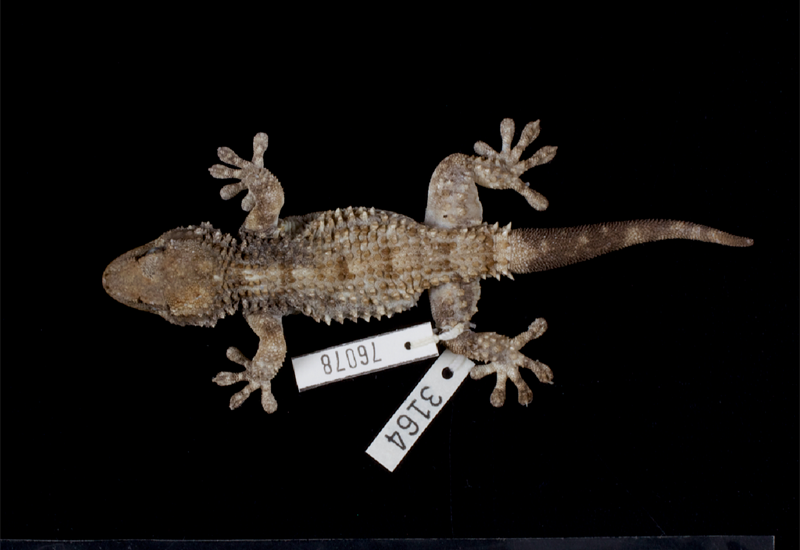 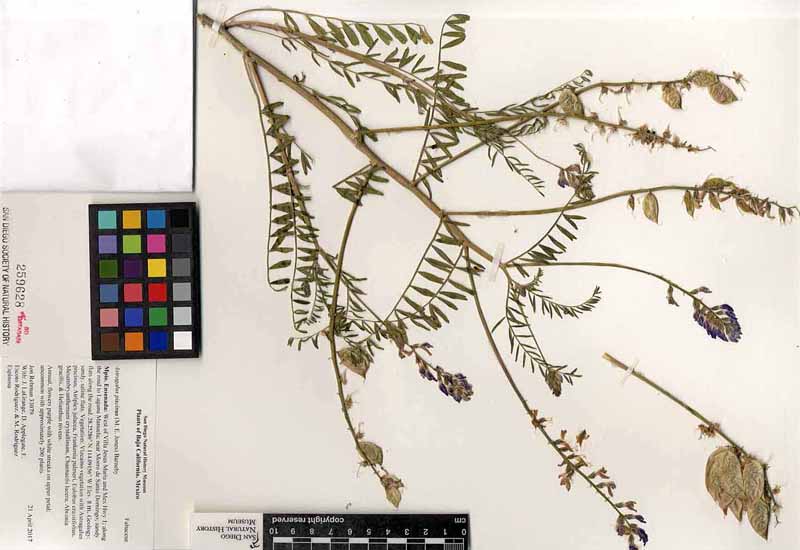 #9 - A rediscovered rare species of milkvetch 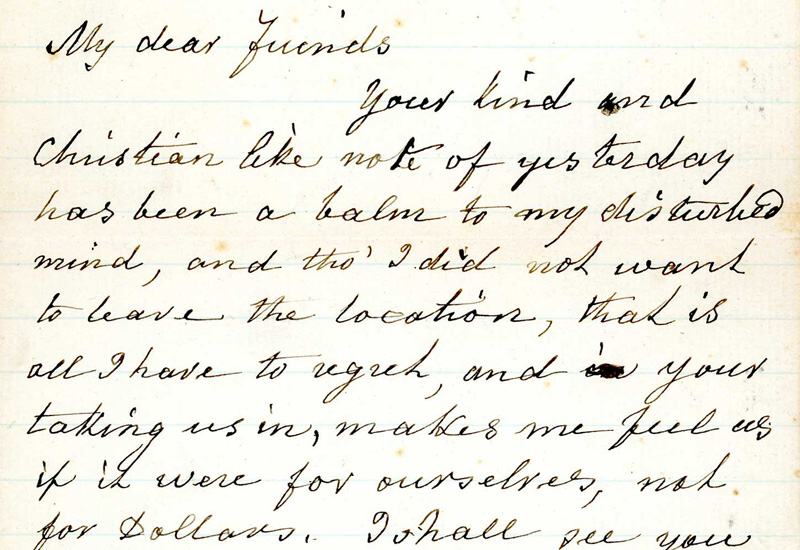 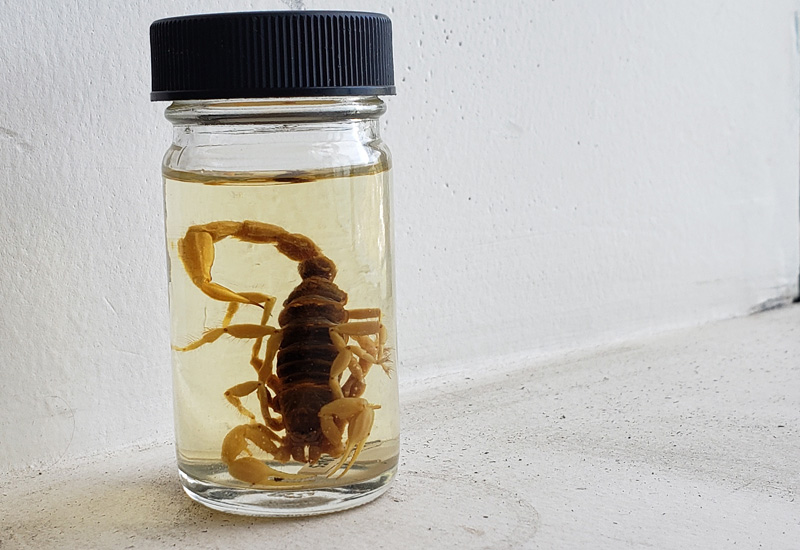 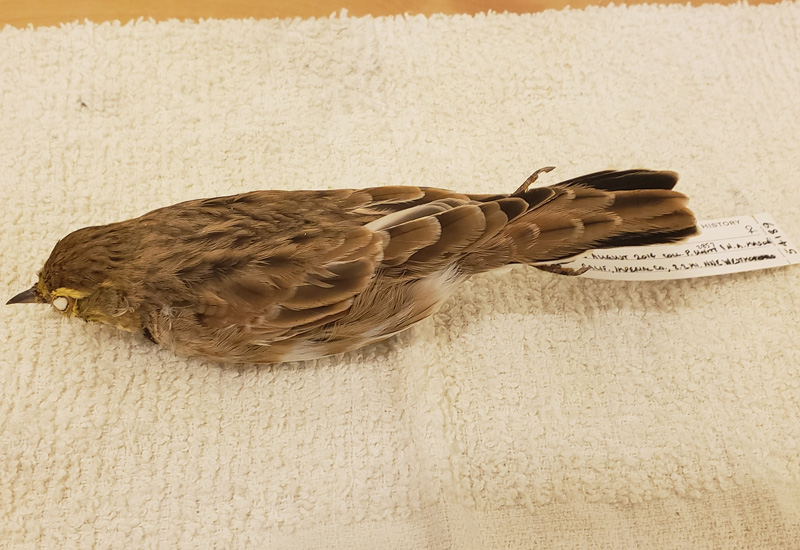 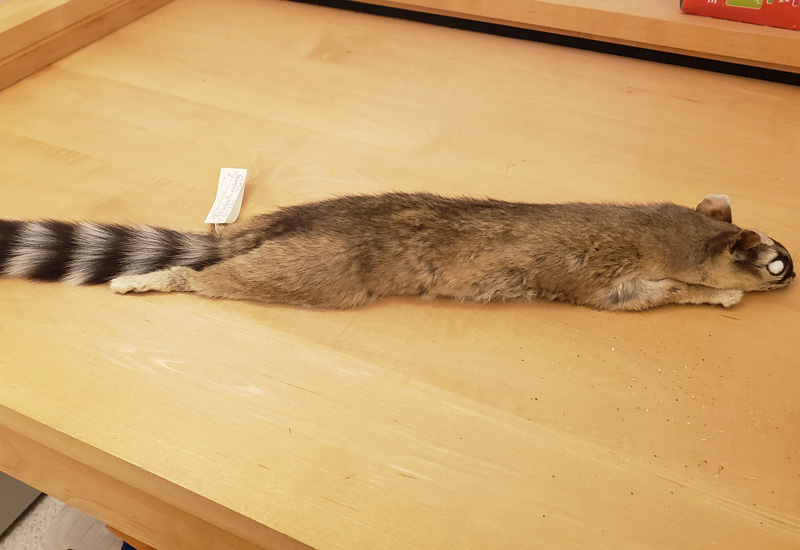 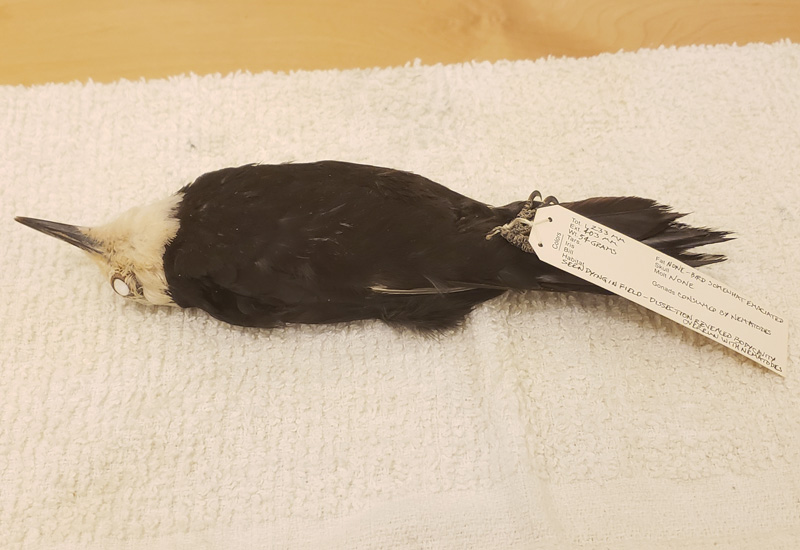 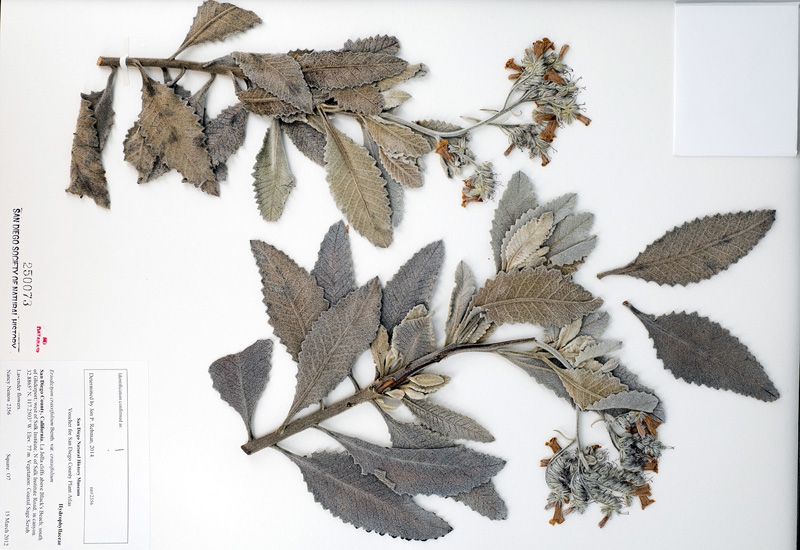 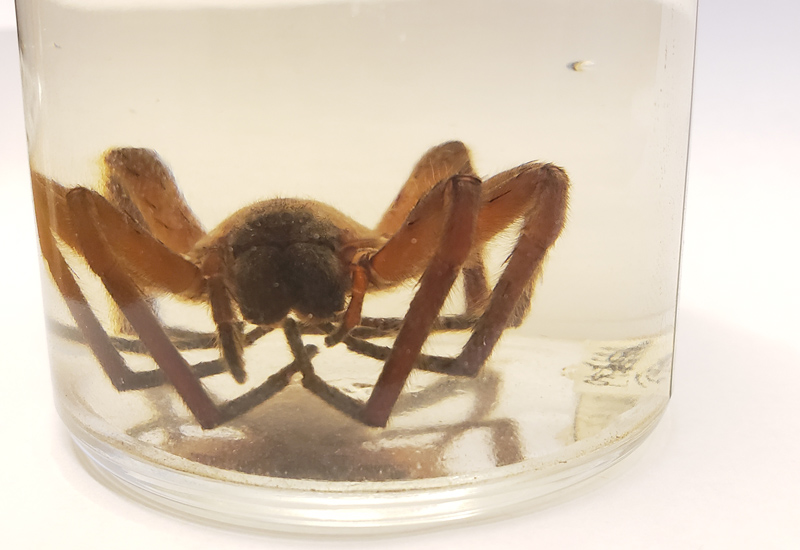 #2 - Cave spider of the Cacachilas 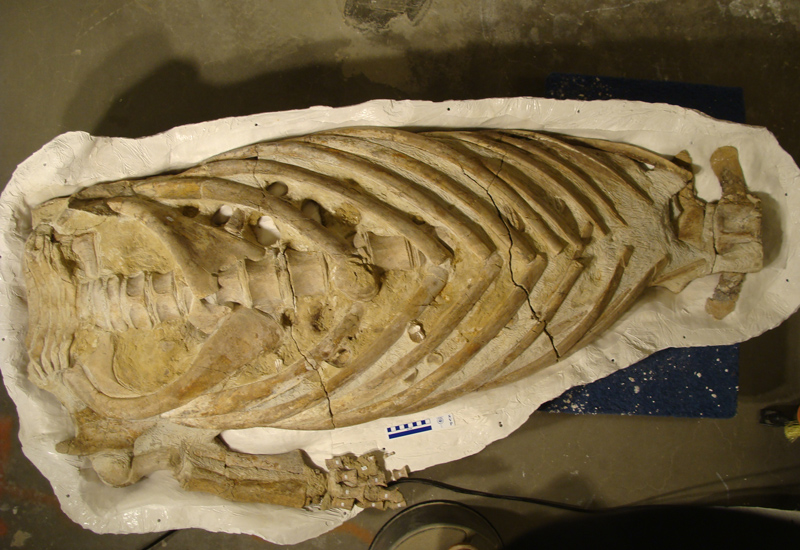 #1 - Fossil whale unearthed at the zoo