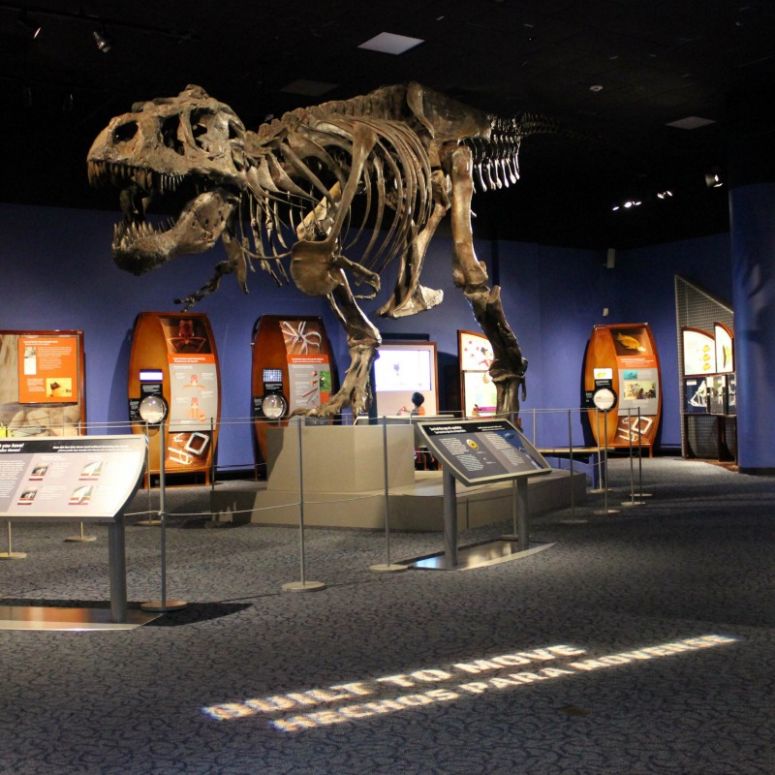 SAN DIEGO—The San Diego Natural History Museum (theNAT) is bringing the natural world to life with two new, temporary exhibitions scheduled for late 2016 and the first half of 2017.

Animals: Machines in Motion opens Saturday, October 29 and will remain on view through January 2, 2017. The highly-interactive exhibition explores animals and plants as machines built for survival, complete with pumps, pipes, insulation, motors, springs, and intelligence gathering devices. In addition, Animals features a life-size cast skeleton of Sue, the largest and most complete T. rex ever discovered.

Using real specimens, life-like models, amazing video footage, and interactive displays, Animals investi­gates how cheetahs run so fast; how the bite force of an extinct fish made it a top predator; how a toucan stays cool in the jungle; how a Venus fly trap detects its next meal; and how many other organisms function as machines in order to survive, move, and discover.

Animals: Machines in Motion also presents examples of biomimicry, man-made innovations inspired by mechanisms found in nature. One exhibit focuses on Swiss engineer George de Mestral’s examination of burdock burrs stuck in his dog's fur. He determined the burrs’ hooked ends made them perfect for clinging to clothing and other looped fibers, and went on to patent the Velcro fastener in 1955.

“By presenting the inner-workings of plants and animals, Animals gives us a newfound appre­ciation for the machine inside every living thing,” said Judy Gradwohl, president and CEO at the San Diego Natural History Museum. “The exhibition delivers captivating information on how plants and animals evolve to maximize survival. Especially when combined with our many permanent offerings, including our newly opened exhibition featuring citizen science and objects from our Research Library, a visit to theNAT is a terrific value.”

Animals: Machines in Motion is presented in both English and Spanish. The bilingual exhibition was developed by The Field Museum in partnership with the Denver Museum of Nature & Science, with generous support provided by the Searle Funds at The Chicago Community Trust and ITW Foundation.The San Diego presentation is made possible with financial support from the County of San Diego and the City of San Diego Commission for Arts and Culture.

Next on the docket is Ultimate Dinosaurs, an exhibition featuring 16 fully-articulated dinosaur specimens from unusual locations in the Southern Hemisphere. It will be on view at theNAT all spring and summer, from February 25 to September 4, 2017. The exhibition reveals a new breed of dinosaurs that evolved in isolation in South America, Africa, and Madagascar—dinosaurs unfamiliar to popular imagination and virtually unknown to most North Americans.

Cutting-edge 21st century technology puts a new twist on these prehistoric creatures, bringing them to life like never before. Through the use of augmented reality (AR) technology, full-scale dinosaurs are transformed into flesh-covered animated beasts. This same technology highlights the continental drift that altered the landscape of the ancient world, setting the stage for the evolution of these bizarre creatures.

Ultimate Dinosaurs is presented by The Science Museum of Minnesota and was produced by the Royal Ontario Museum (ROM) in Toronto. Curation of the exhibition was led by Dr. David Evans, curator of vertebrate paleontology in the ROM’s Department of Natural History. The San Diego presentation is made possible with financial support from the City of San Diego Commission for Arts and Culture.

Tickets for Animals: Machines in Motion are now on sale, and include admission to Animals and all other exhibitions within the Museum as well as access to 2D and 3D films. Admission rates: $28 adults; $26 seniors/students/military; $15 youth (3-17). Children 2 and under are free. Tickets for members are $8-11. Discounts are available for groups, field trips, and passholders. For more information, go to sdnat.org/visit.

The Museum is open from 10 AM to 5 PM daily (closed on Thanksgiving Day and Christmas Day).

For more information on Animals: Machines in Motion or Ultimate Dinosaurs, visit sdnat.org.

About the San Diego Natural History Museum
The San Diego Natural History Museum (theNAT) is the second oldest scientific institution in California and the third oldest west of the Mississippi. Founded in 1874 by a small group of citizen scientists, the Museum’s mission is to interpret the natural world through research, education, and exhibits; to promote understanding of the evolution and diversity of southern California and the peninsula of Baja California, Mexico; and to inspire in all people respect for the environment. The Museum is located at 1788 El Prado, San Diego, CA 92101 in Balboa Park. For more information, call 877.946.7797 or visit sdnat.org. Follow theNAT on Twitter and Instagram and join the discussion on Facebook.