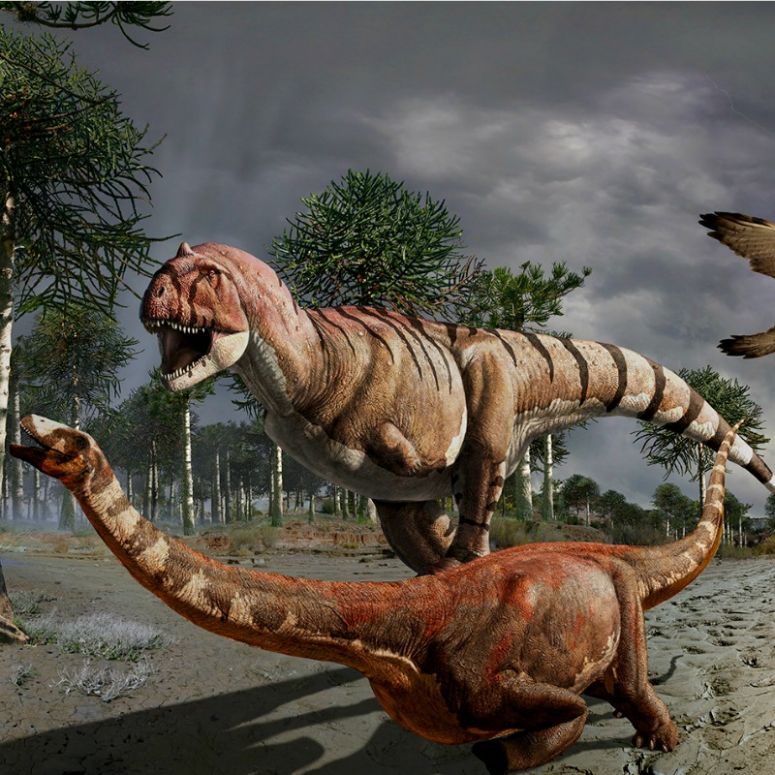 SAN DIEGO— Cutting-edge 21st century technology puts a new twist on prehistoric creatures beginning February 25 when Ultimate Dinosaurs opens at the San Diego Natural History Museum (theNAT). This highly interactive exhibition utilizes augmented reality (AR) technology and features 16 free-standing dinosaur skeletons from unusual locations in the Southern Hemisphere. The exhibition will be on view at theNAT all spring and summer through September 4, 2017. San Diego is the exhibition’s fourth North American stop, and the first on the West Coast.

Based on new, groundbreaking research from scientists around the world, Ultimate Dinosaurs reveals a new group of dinosaurs that evolved in isolation in South America, Africa, and Madagascar—dinosaurs unfamiliar to popular imagination. The exhibition seeks to answer the question: why are Southern Hemisphere dinosaurs so unique and bizarre, and why are they so different from their North American counterparts?

“This dinosaur exhibition is unlike any you’ve seen before,” said Judy Gradwohl, president and CEO at the San Diego Natural History Museum. “Ultimate Dinosaurs features species virtually unknown to most North Americans. The augmented reality technology allows visitors to imagine what these species may have looked like in their day, bringing prehistoric natural history to life.”

Through the use AR technology, full-scale dinosaur skeletons are transformed into flesh-covered, animated beasts. This same technology highlights the dramatic plate tectonic changes in our planet’s geography that set the stage for the evolution of these amazing creatures.

The exhibition tells the story of the break-up of supercontinent Pangaea into the continents we know today and the ways that continental drift affected the evolution of dinosaurs during the Mesozoic Era, 250-65 million years ago. As Pangaea divided first into Laurasia in the north and Gondwana in the south, and later into the many continents we know today, dinosaurs were passengers on these drifting land masses. Visitors to Ultimate Dinosaurs will discover that an amazing diversity of species evolved in isolation as a result of this phenomenon. Where dinosaurs were located geographically helped promote their evolution into an incredible array of unusual forms that dominated wherever they lived.

Some of the dinosaurs featured in the exhibition include:

In addition to seeing the skeletons, learning more about the adaptations that made them unique, and using AR technology to make them come to life, visitors can expect hands-on activities that will help them explore physical characteristics of dinosaurs like the functions of cranial crests and frills, stride patterns, and more. The exhibition also features many other skulls and dinosaur bones that allow visitors to directly compare features of different animals.

Ultimate Dinosaurs is presented by The Science Museum of Minnesota and was produced by the Royal Ontario Museum (ROM) in Toronto. Curation of the exhibition was led by Dr. David Evans, curator of vertebrate paleontology in the ROM’s Department of Natural History. The San Diego presentation is made possible, in part, with financial support from the City of San Diego Commission for Arts and Culture.

Tickets for Ultimate Dinosaurs will be on sale next month and will include admission to all other exhibitions within the Museum as well as access to 2D and 3D films, including National Geographic’s Sea Monsters 3D, which brings to life the extraordinary marine reptiles of the dinosaur age and complements the content of Ultimate Dinosaurs.

Admission rates: $28 adults; $26 seniors/students/military; $15 youth (3-17). Children 2 and under are free. Tickets for members are $8-11. Discounts are available for groups, field trips, and passholders. For more information, visit sdnat.org/visit.

About the San Diego Natural History Museum
The San Diego Natural History Museum (theNAT) is the second oldest scientific institution in California and the third oldest west of the Mississippi. Founded in 1874 by a small group of citizen scientists, the Museum’s mission is to interpret the natural world through research, education, and exhibits; to promote understanding of the evolution and diversity of southern California and the peninsula of Baja California, Mexico; and to inspire in all people respect for the environment. Admission to theNAT’s exhibitions, films, and programs supports the scientific research, regional conservation, and education activities the Museum and its staff embark upon daily. The San Diego Natural History Museum is located at 1788 El Prado, San Diego, CA 92101 in Balboa Park. For more information, call 877.946.7797 or visit sdnat.org. For the latest Museum happenings, follow theNAT on Twitter and Instagram and join the discussion on Facebook.