Unshelved: Cool Stuff from Storage Opens at The Nat this Weekend 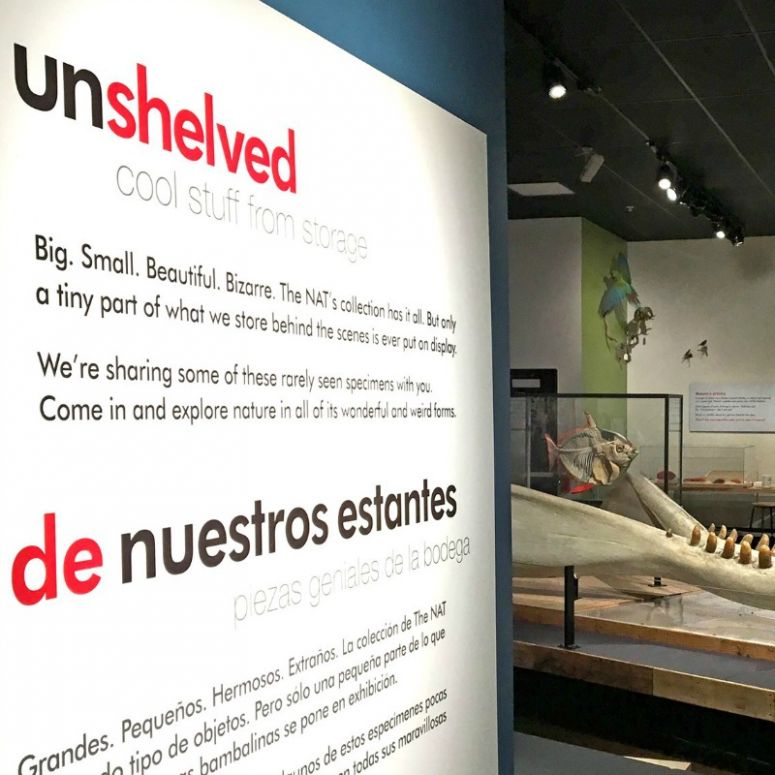 SAN DIEGO—Have you ever wondered what goes on behind the exhibits at the San Diego Natural History Museum (The Nat)? The building looks bigger from the outside than inside because it holds 8 million specimens in storage areas underground and behind gallery walls. The Museum is giving visitors a rare peek behind the scenes when they open Unshelved: Cool Stuff from Storage this Saturday, November 18. The exhibition is included with paid admission and free for members.

Two public programs are planned to celebrate the opening: A Family Day will coincide with the grand opening on November 18, offering craft-making stations and hands-on activities. The following Tuesday, November 21 at 7 PM, Museums scientists will give a Nat Talk and share their “staff picks”—what they believe to be the coolest, most important, and weirdest objects in our research collection.

As visitors enter Unshelved, they will feel as though they have been given an all-access pass to the Museum. The entry is dominated by a giant sperm whale jaw that demonstrates the sheer size of this remarkable mammal. Visitors will also see an impressive display of specimens from all over the world: brilliant gems and minerals, an emperor penguin, massive bats, a 20-foot-long anaconda skin, pinned bugs and insects, a wall of skulls, a case filled with scat, and a variety of vintage taxidermy birds. The specimens chosen for this exhibition demonstrate the Museum’s long history of collecting and the magnificent diversity of life on Planet Earth.

“Most visitors don’t get to see our treasure trove—rows upon rows of shelves, drawers, and crates holding millions of plant and animal specimens collected over the past 143 years,” said Judy Gradwohl, president and CEO of the San Diego Natural History Museum. “A look behind the scenes in our storage areas is like a cross-section of the diversity of nature itself. It is beautiful, strange, and fascinating, and we’re giving visitors a glimpse into that world.”

The Nat was established by a small group of citizen scientists in 1874, and since then has amassed a collection of more than 8 million specimens. Although the institution focuses its research efforts primarily on Southern California and the Baja California Peninsula, through its history, it has acquired specimens from all over the world.

The specimens in the Museum’s holdings, which are meticulously preserved and catalogued, are curated by several departments that comprise the Biodiversity Research Center of the Californias (BRCC). Research departments and collections include Birds and Mammals, Botany, Entomology, Herpetology, Marine Invertebrates, Mineralogy, Paleontology, and the Research Library.

“The Nat has been building a collection of natural history specimens for more than 140 years,” said Dr. Michael Wall, vice president of science and conservation at the San Diego Natural History Museum. “It’s high time we create an exhibition that is solely dedicated to telling that story. Unshelved brings the back of house to the front. Its quirkiness is sure to dazzle our visitors and prompt them to ask questions, which is at the root of scientific discovery.”

Museum collections help inform present and future scientists, students, and Museum visitors about evolution, implications of climate change, and how to protect the unique biodiversity and natural resources in the region. In addition to their tremendous scientific value, specimens are also displayed in exhibitions, such as Unshelved, and are used by the Education Department to more clearly and definitively illustrate lessons being taught at the Museum.

Unshelved is located on Level 2 of the Museum and is included with general admission. General admission includes access to all other exhibitions within the Museum as well as access to 2D and 3D films, including Incredible Predators, which examines the world of major predators as never before, taking an intimate look at the remarkable strategies they use to succeed.

The Museum is open from 10 AM to 5 PM daily. Closed Thanksgiving and Christmas Day.

About the San Diego Natural History Museum (The Nat)
The San Diego Natural History Museum (The Nat) is the second oldest scientific institution in California and the third oldest west of the Mississippi. Founded in 1874 by a small group of citizen scientists, the Museum’s mission is to interpret the natural world through research, education, and exhibits; to promote understanding of the evolution and diversity of Southern California and the peninsula of Baja California, Mexico; and to inspire in all a respect for nature and the environment. The Museum is located at 1788 El Prado, San Diego, CA 92101 in Balboa Park and is open daily from 10 AM to 5 PM. For more information, call 877.946.7797 or visit sdnat.org. To stay up to date on Museum news, follow The Nat on Instagram and Twitter and join the discussion on Facebook.