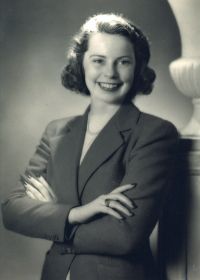 Mary Hollis Clark received her degree in business administration from the University of Georgia in 1942. She was truly a trailblazer, demonstrating that intelligent and competent women could compete equally.

The family of her late husband Dallas Clark had deep San Diego roots; the couple settled here three years after they were married in 1943 at her family home in Columbus, Georgia while Dallas was a Captain in the Army. Mary followed in her mother-in-law’s footsteps in diving into the social and philanthropic life of her adopted community. She and Dallas loved exploring San Diego’s backcountry as well as National Parks throughout the west. They shared a passion for horseback riding, gardening, and traveling. She especially enjoyed writing and drawing.

Mary first became involved with the Museum as a member of the Covey volunteer group. In 1964 she was elected to the Board of Directors. Mary served two terms as President of the Board over a twenty-five year span before being elected a Trustee Emeritus. She was the first of only three female board members who have served as President since the beginning of the Society.
With a personal appreciation and genuine curiosity about native plants, birds, and all our local wildlife, Mary maintained an active supporting interest in the research carried out at the Museum from her earliest days. During the 1960s, she played an important personal role in obtaining the Klauber herpetological library for the Museum, by donating funds to create the additional room and shelving.

In 1988, the Mary Hollis Clark Desert Discovery Lab opened to the public, featuring special books, herbarium specimens, and videos, as well as a collection of live desert animals, and artifacts such as animal nests and bones. Mary loved the fact that the Desert Discovery Lab was especially fun and engaging for both children and adult visitors to the Museum.

In 1996, Mary was given the ultimate accolade accorded by biologists, by the naming of a new subspecies of marsh wren, Cistothorus palustris clarkae, in her honor. This was announced at a reception to celebrate the establishment of the Biodiversity Research Center of the Californias, as well as the new endowment of the Curator of Botany by Dallas Clark, also in honor of Mary.

A landmark year occurred in 1998, when the Museum and the San Diego Zoo successfully nominated the Clarks for the American Association of Museums Medal for Distinguished Philanthropy, an award which Mary and Dallas traveled to Los Angeles to receive from the Chair of the AAM’s Board of Directors.

This annual national award honors “altruism and extraordinary museum patronage,” and meant that Mary and Dallas were in the company of other stellar former recipients, such as the Chase Manhattan Bank, James Michener, Henry Luce and Paul Mellon.

Mary never lost faith in the Museum’s mission and purpose and she served as a constant reminder of how to handle difficulties that came our way. She also soared with us during our successes. Mary famously stated, at the dedication of the new wing of the Museum in 2001, “Now that we have two wings, we can fly.” In 2001, Mary fittingly celebrated her 80th birthday in the new Mary and Dallas Clark Wing during Monarca: Butterfly Beyond Boundaries.

Mary’s wise counsel helped guide the Museum’s President and CEO, Mick Hager, and she became a valued resource for advice on every major decision. Mary regularly attended Museum events—including cheerfully modeling a beautiful sapphire and diamond necklace and earrings that perfectly matched her eyes at last spring’s All That Glitters gala. 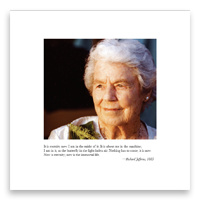 Mary is survived by two daughters, Nita van der Werff of Taos, New Mexico, and Dale Clark of Bend, Oregon; two granddaughters, Tessa and Leigh; and a great-granddaughter, Edith Juniper. Staff members recall how last November, Mary proudly showed off a baby T-shirt from the Museum’s store, a gift purchased for her great-granddaughter! Many at the Museum thought of Mary as their “Museum Mother.”

Her generosity of time, talent, and treasure is unmatched. In the style of another strong female Museum supporter, Ellen Browning Scripps, Mary demonstrated the highest values of volunteerism and philanthropy. She inspired each and every one of us to do our absolute best and made us proud of our work. Our collective hearts are breaking as we look to a future without our beloved Mary Clark. However, as with other people who similarly inspire those around them, the strength of her personality, generosity and integrity never depended on her mere physical presence. Mary is still a living, vital part of the San Diego Natural History Museum, and will continue to be so for all who have known and loved her.