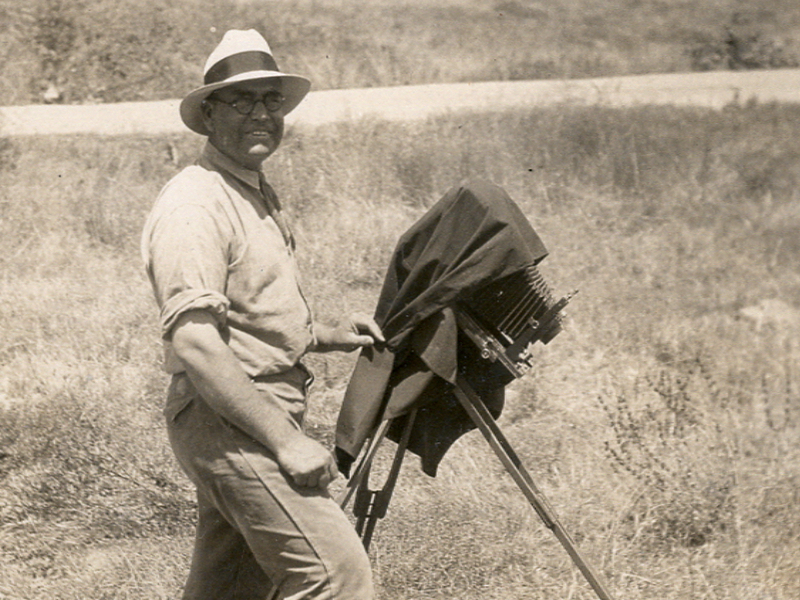 Laurence Markham Huey (1892 - 1963) was Curator of Birds and Mammals at the Museum for 38 years, 1923-1961. An energetic collector and photographer, he rose from humble beginnings to make a significant contribution to the world of science.

"I was born September 6, 1892, on a farm in the Tia Juana Valley, California, within a stone’s throw of the International Boundary. Have always loved fields with their flowers, birds and animals. I tried very often to preserve the heads of the quail my father brought in from his hunting trips when [I was] still a small boy. Collected birds’ eggs in spite of parental opposition and regular chastisement for the offence."

Huey’s lifelong interest in natural history apparently began at the age of three when "a Mexican farm hand gave him a collection of swallows’ eggs."* His association with the Museum began a little later; he was introduced to the institution by his manual training teacher, W. S. Wright, later a Museum entomologist. Thus began a longstanding acquaintance with the museum and its staff.

"Met Frank Stephens, one of the pioneer naturalists of the southwest, when still in my early teens, and this meeting furthered my determination to pursue natural history as a life work.

My school days ended with the eighth grade and I have been on my own ever since."

In 1908, at the age of 16, he joined Kate Stephens’ Naturalist class at the museum. When he was 21, in 1913, he was on a trip to the Coronado Islands and met Donald R. Dickey, "a wealthy bird collector and photographer," with whom he was to work for the next ten years. Huey became an official member of the San Diego Natural History Society the next year, 1914. 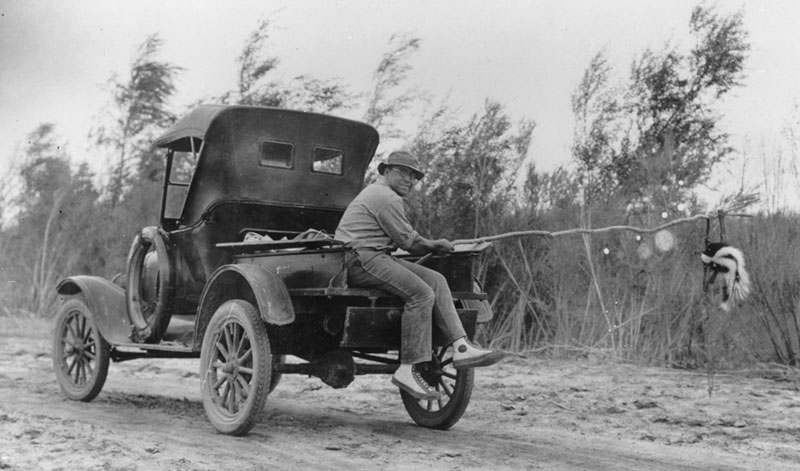 "I met Donald R. Dickey and spent ten happy years collecting birds and mammals in California and Arizona and learned considerable photography while helping him make pictures for Dawson’s book Birds of California. Also at this time I became interested in mammalogy as well as ornithology. This was primarily due to the influence of three persons–Stephens, Dickey and A. B. Howell."

Huey, like many others before him, maintained his interest in natural history as a part-time vocation ‘til, unlike many of his contemporaries, he was able to turn it into a full-time job.

"During the fall and winter months, when not helping Dickey, I worked at hard labor–in lumber yards, gardening, and the like, but never for one instant forgot my interest in natural history.

The guiding star of opportunity came in March, 1923, when I was appointed to the staff of the Natural History Museum in San Diego, California…" 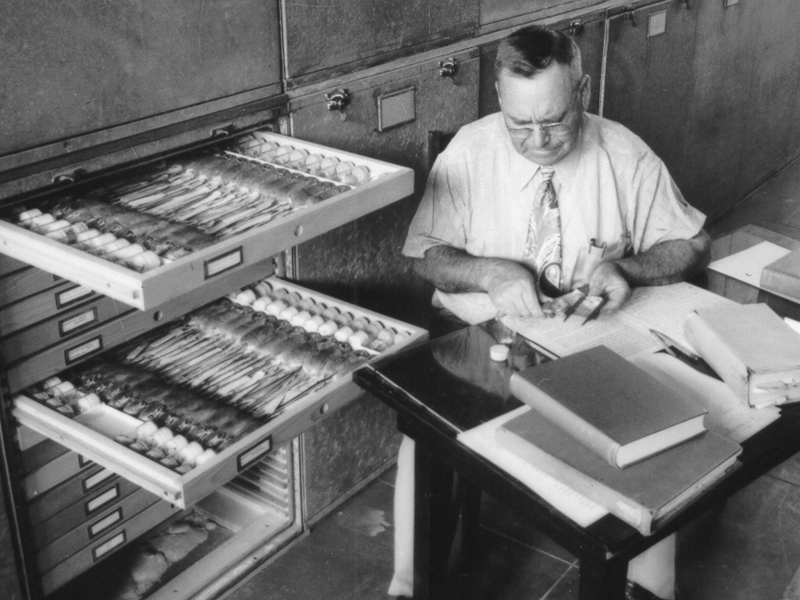 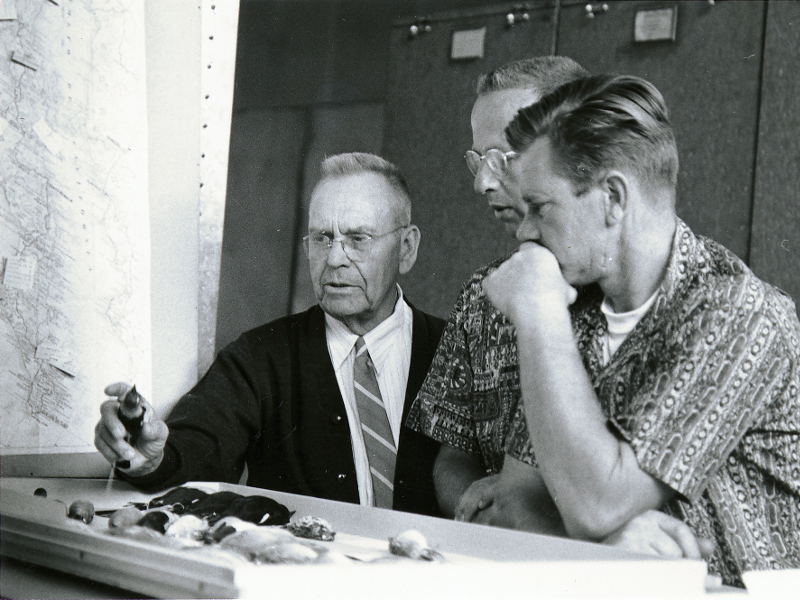 "Huey’s appointment was indeed fortunate for the Museum. Despite his lack of training, he was a born naturalist and was able to amass the nation’s most significant collections of birds and mammals from southern California (particularly the Imperial Valley) and northern Baja California. These remain the cornerstone of our holdings.

Huey also wrote over 200 scientific papers and named many new forms of birds and mammals. It was largely his efforts that firmly established the museum’s eminence in systematic zoology. Huey also built many of the storage cases still in use in mammalogy, ornithology, and malacology, and he collected the birds for the Identification Species of San Diego County Birds, toward which Ellen B. Scripps contributed $2000…."

Huey started out as Curator of Vertebrates, a post held first by Frank Stephens, then by A. W. Anthony, before coming to him. In 1927, his title was changed to Curator of Birds and Mammals, a description which remains to this day.

During Huey's tenure, publications in Transactions of the San Diego Society of Natural History were increasing, and therefore the Museum's national reputation also grew. With donations from other naturalists and acquisitions from Huey’s own expeditions and collecting trips, by 1934, the Museum’s bird collection was the 19th largest in the United States. In 1948, "recognizing its enhanced reputation in science," the Museum, for the first time, sent Huey as curator to a national scientific meeting (Jehl, 1975).

Huey continued to enjoy his work till his retirement in 1961 – "Now, with a balanced ration of field work collecting specimens, the care of a growing collection of Birds and Mammals with the study necessary to classify them, for a vocation, and photographing as an avocation –well it’s worth all the arduous tasks life has presented," he wrote.

George Lindsay (Museum director), on the occasion of Huey's retirement in 1961:

"Huey's contributions to our museum are tremendous... He is responsible for our outstanding collection of birds and mammals, which number more than 50,000 specimens, and the quality of which is superior to any similar collection I know.

He is the authority on the birds and mammals of Baja California. He pioneered field work there.

He has an almost intuitive ability to analyze complex problems of species development. He carried the burden of our research program almost alone for many years. He has made a great contribution to the world’s knowledge about our area." 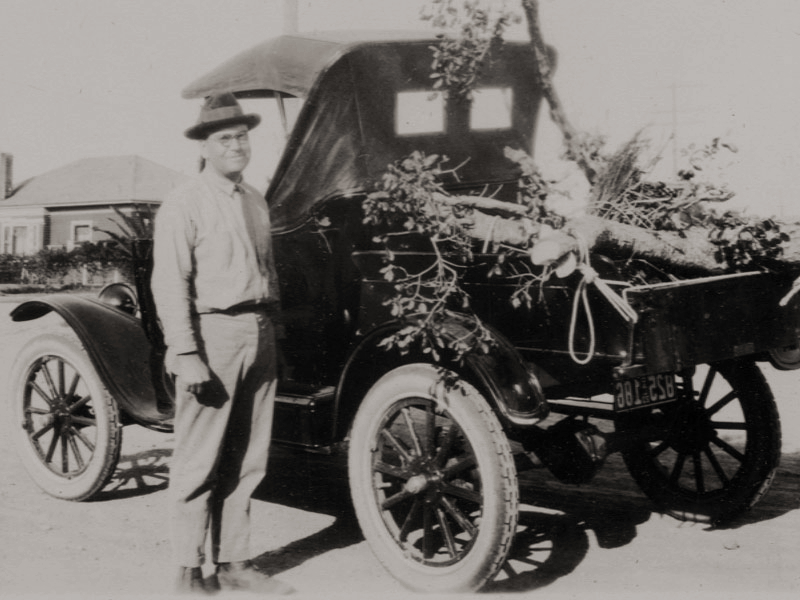 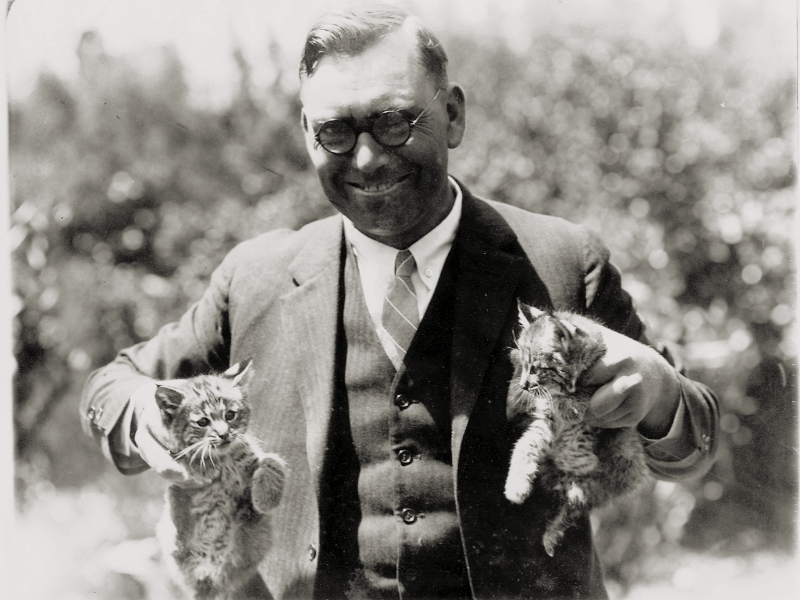 Laurence Huey recalled that his first official collecting trip to Baja California was with Griffing Bancroft in 1923. "In those days, we cooked on the camp fire, ate beans and rice, and lived on 30 cents a day."

By the time he retired, in addition to expanding the museum collections to the "more than 50,000 specimens" noted by Lindsay, he had built a private collection of 4000 bird and 1000 mammal skins, mostly from Imperial Valley and Northern Baja California. This collection was purchased by the Museum for $6500 (Jehl, 1975).

He continued to make pictures throughout his career, and when he retired, had "20,000 feet of uncut film still to edit and thousands of still photographs."

Self-motivated, with a largely self-directed education—reading, apprenticeship, and help "for Latin and Greek" from a former schoolteacher, Laurence Huey had a long and distinguished career at the Museum. He left a rich legacy of research, scientific collecting and conservation in specimens, pictures, and words.

* Note: Huey's words in Early Years taken from undated archive piece. Other quotations, unless otherwise attributed, are from "Mammal and Bird Expert to Retire," San Diego Evening Tribune, 25 October, 1961. An amusing profile of Huey can be found in the Museum publication Environment Southwest Oct-Nov 1974 No. 467, p.19.