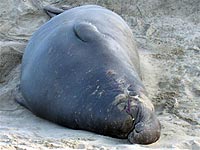 The northern elephant seal (Mirounga angustirostris), on the verge of extinction in the early part of the twentieth century, is one of the more recognizable marine mammals. Known for its great size, which can exceed 4000 pounds, and the male's characteristic long, fleshy snout or proboscis, the elephant seal engages in aggressive protection of its territory from other elephant seals. Noisy disputes among males, featuring a lot of bellowing, usually result in a good deal of scarring on older specimens. The northern elephant seal's present day range spans from the Aleutian Islands off Alaska to the coast of Oregon, with breeding areas further to the south from the Santa Barbara Islands off the California coast to Cedros Island off the coast of Baja California.

The elephant seal's diet is varied. Hunting for squid, octopi, fish and small sharks, the seal will sometimes consume as much as 25 percent of its bodyweight in a feeding period. Due to the mammal's size, adults have few natural predators, other than the occasional great white shark and killer whale.

The northern elephant seal can be trumpeted as a prime example of a mammalian population recovery due to conservation efforts throughout the twentieth century. Beginning early in the 1800s, the seals were hunted extensively for their blubber for use in the seal oil industry. So great was the slaughter that by the 1880s, the species was considered extinct. It was a great surprise when a small population of the seals was found in 1892 on Guadalupe Island, an isolated, rocky piece of land some 200 miles off the coast of Baja California. Left alone except for a few scientific expeditions over the next 30 years, the population slowly increased to a still dangerously low 264 individuals. Greatly helped by the Mexican government giving full protection to the seals in 1922, the elephant seal's numbers had increased to between 8,000 and 10,000 in the late 1950s. 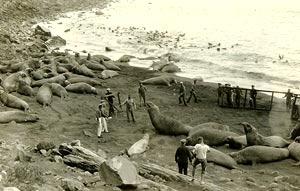 The introduction of the 1972 Marine Mammal Protection Act served to reinforce this growth and today the seal's population has grown well beyond 100,000 individuals. Branching out from their stronghold at Guadalupe Island, the seals now thrive in large rookeries along the Pacific coast, including Año Nuevo Island, San Nicolas Island, San Miguel Island, Isla de Guadalupe, and Islas San Benitos.