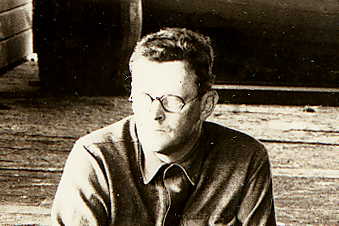 A. Brazier Howell, born in Maryland in 1886, spent a total of one year in college, and then dove into a self-funded study of the birds of the Channel Islands. His interests expanded to include mammals, and in the 1910s he sold a substantial set of 5000 specimens to the Dickey collection in Los Angeles. During the 1920s he was officially associated with the Divison of Biological Survey in the U.S. Department of Agriculture, as well as the Smithsonian Institute, but continued his independent studies and trips. His experiences as a field naturalist earned him a position as professor of anatomy at Johns Hopkins Medical School in 1928. In 1930, Howell published a book, Aquatic Mammals, presumably based on knowledge gained both in this expedition and others, such as a 1928 study of captive bottlenose dolphins at Hatteras, NC. The Trinidad trip may have been a result of prodding by his colleagues: in a letter written to Joseph Grinnell several months before the trip, he writes: “[Kellogg] and Miller have chevvied me into some whale stunts”. These studies also motivated him to organize the “Council for the Conservation of Whales and other Marine Mammals”, which testified before the U.S. Senate in 1931 to spur the government to apply controls to the killing of large whales, which were dwindling to extinction.

In justifying his efforts to save the large whales from extinction, Howell said: “it may be seen that our whale supply is a matter of economic importance, and not merely of aesthetic concern to those with emotional tendencies.” 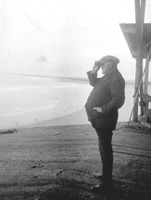 Dedrick* was a Norwegian whaler who founded the California Sea Products Company in 1914, and in the following years he established stations at Moss Landing and Trinidad. Hunting for whales using steam-powered boats and harpoon cannons resulted in their rapid depletion, and after the 1926 hunting season described in these field notes, Dedrick began using floating stations along the west coast.

These stations had two advantages: they could be moved to where the whales were known to be, and they allowed the speedy processing of whales without a trip back to the station. Pacific Coast operations were also hurt by an increase in worldwide supply due to the expansion of whaling into the Antarctic: in 1929, worldwide whale oil production was five times greater than in 1919; during this period, the Pacific Coast contribution to whale oil production decreased from 1/10 to 1/40 of the total. 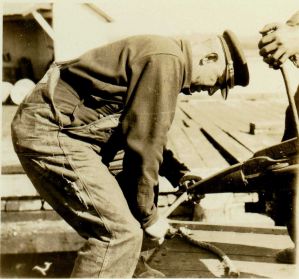 Louis Lane, captain of the whaler “Hercules”, had a colorful past in the Arctic. He was born in American Falls, Idaho, May 19, 1879. His initial whaling efforts were from the shore, but he then moved on to powered boats and even claimed to have made the first commercial landing at Wrangel Island, off the coast of Siberia. In 1913, he made an expedition in his schooner Polar Bear, accompanied by newsreel cameraman Will Hudson and also five aspiring Arctic hunters from Harvard, planning a mix of whaling and sport hunting. The vessel got trapped in ice in the Beaufort Sea, and Lane, Hudson, and two of the hunters hiked across the ice, through the Brooks Range, and all the way to Fairbanks. Lane sailed back to the Polar Bear the next Spring and resumed the trip. This journey was documented by Will Hudson in his book Icy Hell, and also by Polar Bear chief engineer Ben Kilian, in his book The Voyage of the Schooner Polar Bear (edited by John Bockstoce). Lane had further adventures in whaling and fur trading in Alaska and Asia, and on a 1924 trip brought along film maker Sydney Smith, who filmed footage for the movie Mystery of the Arctic. In 1925, Lane moved to California, working as both a whaler and harbor pilot. He was again involved in motion pictures when he commanded the Nanuk in the 1933 movie Eskimo. (from Kilian/Bockstoce)