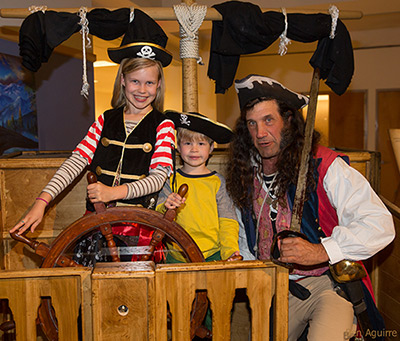 Come aboard the Scurvy NAT!

Let it be known buckos, the children’s play area has been captured by pirates! In celebration of our current special exhibition Real Pirates, you’ll find a new Pirate Playland in the Museum’s Atrium. A ship known as the Scurvy NAT is ready for play, fully equipped with a captain’s wheel, cannons, a jolly roger to hoist, and fun props for kids to don as they act out their favorite pirate scenes.  There is also seating surrounding the ship for little pirates’ parents or guardians to rest while the kids play.

Any hand wishing to see the return of the Camp-O-Saurus play area is hereby ordered to adventure among the salty dogs in Pirate Playland until such a time as it meets the captain’s pleasure to return the camp to theNAT (most likely in September 2014).