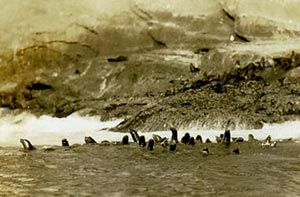 In 1936 the State of California had placed firm restrictions against the killing or capture of sea lions, as well as most other marine mammals, along its coast. Mexico had passed similar laws concerning the critically endangered elephant seal in its waters. Mexico, though, was not as stringent when it came to conservancy issues regarding sea lions.

The Dr. Ross Dog and Cat Food Company from Los Alamitos, California, had begun to take advantage of the poor protection afforded these animals in Mexico during 1937. Becoming a target for conservationists because of their whale calf hunting and vehement opposition to California’s protection of marine mammals, the company had fallen into receivership and turned to Mexican waters after having their request to hunt off California denied. 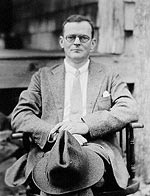 Clinton Abbott, director of the Natural History Museum, first heard of the sea lion hunting in a latter from T. N. Faulconer, which outlined the horror of the situation.

Spurred on by Faulconer’s letter, Abbott began to make contact with conservancy-minded organizations and influential individuals throughout the United States.

Foremost among these early contacts was Alfred Brazier Howell, a member of both the Cooper Ornithological Society and the American Society of Mammalogists known for his conservation work regarding whales off California. 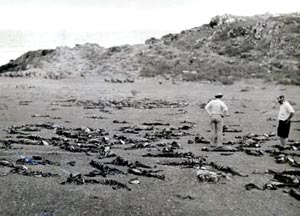 Howell would come to play an integral role during the early days of the effort, writing the Mexican authorities and putting Abbott in contact with numerous sources.

Informed of the situation concurrently with Abbott, as the pet food company had apparently been brazenly landing the meat in San Diego, the San Diego Sun ran a series of articles on December 16th and 17th emphasizing more the use of a royal yacht in the operation rather than on any conservation issue.

A month after learning of the situation, Abbott had little success to show. The Ross company refused to answer his requests for information while the Mexican Government was slow to respond to inquiries made by both Howell and Abbott. One encouraging development occurred when the powerful American Humane Association pledged their support.

Abbott was beginning to refine his approach to the situation, though. Sensing that appealing to the Ross Company's ethical sensibility would be a hard fight, Abbott began to pursue any potential legal action that could be taken. Realizing the possibility that elephant seals could be killed in a case of mistaken identity with the sea lions, he pressured the Mexican government to revoke the concession while informing the California Fish and Game commission that a protected species was being killed for sale in the state.

February was a month of success for Abbott. On the 10th, the Mexican Fish and Game commission, feeling the pressure from Abbott's letter writing campaign and eager to prevent the death of elephant seals, refused the Ross Company’s request to renew its commission. While Abbott was initially "none too optimistic" that the slaughter had stopped, records show that for the time being, the Mexican government did live up to their word.

The campaign was also mentioned in the Natural History Museum’s bulletin for the first time, leading to a "storm" of protest from the society's membership. Realizing the power of galvanizing the society's membership through print, Abbott also began to worry about potential inaccuracies leading to a libel suit, a common theme in the campaign to come. 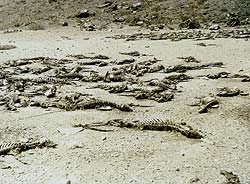 Even after Ross’ concession in Mexico was stopped, Abbott did not end the campaign. Fearing a backdoor concession given the Ross Company by the Mexican government, Abbott continued his inquiries. What he found was disturbing. While the Ross Company was not directly operating in Mexican waters, fishing companies and Mexican contractors had begun to do the hunting instead. Howell reported that at times during this period up to 180 sea lions were taken a day. The Ross Company was also said to be looking into whaling again, to supplement sea lion meat in their dog food, after having lost their concession in California.

A bit of progress came late in March, though, when Sumner Welles, then the Assistant Secretary of State, brought up the sea lion issue with the Mexican ambassador in Washington, D.C.

While the Ross Company had continued its operations in Mexico in a roundabout fashion since its own concession had been revoked, it had also kept a presence in Mexico City to win that concession back. Upon hearing of this, Abbott and Joseph Sefton, President of the San Diego Society of Natural History, wrote to the Mexican Fish and Game Department detailing their opposition to the company's operation. Surprisingly, José Breton of the department wrote back, asking that the Society give him an official opinion against the slaughter and giving assurance that the situation would be dealt with.

Breton's request set off a firestorm of activity for Abbott. Promising to give Mexican officials "a little bombardment" of letters from conservation groups throughout the country, Abbott embarked on another letter writing campaign. Numerous agencies, such as the Scripps Institute of Oceanography and the Audubon Society answered Abbott's call. Warning of the dangers to the ecosystem, to tourism because of sea lion carcasses floating to shore, and to the survival of the elephant seal, the campaign was shortlived, yet effective.

July of 1938 saw the Ross Company make increasing contact with the Museum. C. E. Matlock, the "contact man"; for the Company, made an unannounced visit, warning that he was being sent to Mexico City to personally lobby the Mexican government on Ross' behalf. A couple of weeks later, the Company secretary made a phone call to Abbott, asking to negotiate so as to avoid any legal problems.

This all proved to be quite disturbing for Abbott. Fearing that his place as a "mere museumist" would not allow him to have as much influence as the businessmen surrounding him, Abbott was still unwilling to change his position on the matter. Adding to his distress was the amount of resources and time that the Ross Company was willing to devote which far outweighed those of his own.

These meetings did yield one very positive result, though. Abbott's recount of the Matlock meeting fell into the hands of the American Society of Mammalogists' (ASM) Dr. T. S. Palmer. Palmer, Chairman of the Committee on Marine Mammals, requested Abbott's presence at the ASM's national conference and soon a resolution was drawn up by the society to support Abbott's efforts concerning the sea lion.

In September, Abbott and W. J. Ross himself, president of the Ross Company, met face to face for the first time. Telling Abbott that he saw him as the "chief obstacle" in regaining his Mexican concession, Ross soon left for Mexico to plead his case personally. Much to the chagrin of Abbott and the Society, Ross was able to work out a deal with the Mexican authorities and resumed hunting sea lions in October.

Learning about the new concession through newspaper clippings, Abbott contacted the American Society of Mammalogists and initiated a new letter writing campaign to Mexican officials.

In April of 1939, California commercial fishermen took a major step to remove protection of the California sea lion along the coast. Complaining about the sea lion's supposed negative effect on the fishing industry, they introduced a new bill, A.B. 1365, to remove restrictions on killing the animals. Reverting his attention from the Ross Company, Abbott contacted his local representatives - Jeanette Daley in the State Assembly, and Ed Fletcher and Frank Gordon in the State Senate. With his reputation in the matter preceding him, Abbott quickly made his influence felt, even after the bill was recommended to pass by committee. 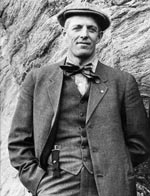 With the flurry of letters Abbott sent to local representatives in Sacramento, he was able to gain a few ears. On June 1st, the state assembly voted on A.B. 1365. For the next couple weeks, the Society was left in the dark concerning the results. Conflicting reports came to Abbott, first saying that the bill had passed and was then defeated.

It was not until the 13th that Abbott received official word from the California State Fisheries that the bill had indeed been defeated after several attempts were made to pass it.

With this success Abbott had now become a major player in sea lion conservancy. Reflecting this, in late June, Bird-Lore, the journal of the National Association of Audubon Societies, asked Abbott to submit an article concerning the sea lion campaign.

Abbott’s initial response was to turn down Bird-Lore's offer, feeling that the success in defeating A.B. 1365 had made the article less timely. However, learning from his earlier mistakes, Abbott decided that complacency on the issue could only do the campaign harm, as had happened when Ross renewed his license, and agreed to write the article.

Upon writing his first draft, Abbott immediately became wary of any possible libel suit against himself and the Museum, an issue which postponed the article and led to a major rewrite. Mention of the Ross Company and its "ugly disposition" were removed while Abbott shortened the length to please the Museum and Society's officers. With these precautions, Abbott submitted the article for the October issue of Bird-Lore.

The response to the article, "Sea Lion Slaughter" was positive. It was made the lead article in the issue, with the Audubon Society's Executive Director, John Baker, claiming that the article would do "quite a bit of good" while recalling a similar effort in Maine to save the harbor seal. J. R. Pemberton, governor of the Cooper Ornithological Club and Abbott's confidant in the sea lion slaughter campaign, congratulated Abbott on the "fine style" of the article.

While Abbott, stinging from the legal necessity to omit the Ross Company's name, called the article "somewhat superficial and hastily written" it had obviously influenced a good number of people.

The Bird-Lore article was also reprinted several times. Most intriguing of these reprints was the Spanish language version published in Mexico, after Abbott's secretary's father translated it for the Mexican press. With this, Abbott's word had reached the popular front, fulfilling the campaign's early aim to arouse international sentiment against the killings.

The article also proved to be Abbott's last major effort in the sea lion conservancy campaign. Fearing legal retribution against the Museum and himself, Abbott felt it best to step aside and allow other groups with more "powerful leverage" to engage in the fight against the Ross Company.

After Abbott removed himself from the debate, many of his contacts and the San Diego Society of Natural History continued to weigh in on the issue. In April of 1946, a month after Abbott had died, a new bill was introduced in the California State Legislature to halve the sea lion population for much the same reasons that had spurred A.B. 1365 in 1939; sea lions were blamed for destroying fishing equipment and depleting oceanic fish stocks. Laurence Huey and Robert T. Orr, both close confidants of Abbott’s during the first campaign, stated the “definite opposition” of their organizations to the new bill, worrying about the potential upset of the “balance of nature.” It would not be until 1972 that sea lions were guaranteed permanent protection by the Marine Mammal Protection Act.

As another postscript, the Ross Company was left reeling by Abbott and other conservancy efforts to stop their hunting. Already in receivership in 1937 after their whaling rights were revoked, Abbott’s campaign put a further dent into their profits. By 1944, they declared bankruptcy.