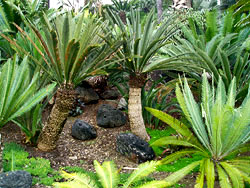 Description:
Cycad fossils have been found on every continent, including Antarctica, and some of the larger islands of the world. During the Mesozoic, they were extremely diverse and accounted for about 20% of the world’s flora during the Triassic and Jurassic. In fact, the Jurassic is often referred to as the “Age of Cycads.” Cycads were probably an important food source for many herbivorous animals during the Jurassic Period.

Fossil remains that have been found include leaves, stems, cones and seeds. Although they bear a superficial resemblance to palms, they are a completely distinct group of seed plants, and are nearly unique among living plants in possessing motile sperm cells.

Their seeds are not enclosed within an ovary, such as that found in other plants like apples or coconuts, but are exposed and visible on leaf-like structures, arranged in a cone shape. Because the seeds are exposed in this fashion, cycads are considered part of the gymnosperms, or plants with “naked seeds.” 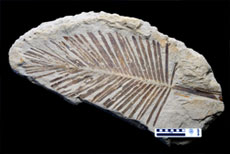 Ecology:
Today we have 11 living genera, and 19 extinct genera known only from fossils. Cycads have existed for 300 million years! Sometimes described as “living fossils,” they occur in greatly reduced numbers today, and may be close to the end of their tenure on Earth.

Living cycads exist in several different habitats, such as rainforests and seasonally dry forests, in grasslands and savannas. Some grow at very high elevation. All living species occur within the tropical, subtropical and warm temperate areas of the world.

Cycads are dioecious, which means there are separate male and female plants. Fertile seeds are only found when the male and female plants happen to grow near one another, and mature at the same time, so it is hard for them to reproduce. Germination is also slow. Because they grow very slowly and reproduce irregularly, they are facing extinction. Many are protected by law, because plant collectors have reduced their numbers, as well.

Beetles and bees may have played important role in pollination of cycads. The seeds are large and often brightly colored in reds and yellows, and thus able to attract animals to participate in dispersal of the seeds.

Further Research:
The relationship of cycads to other living gymnosperms, such as conifers, is in need of further research.