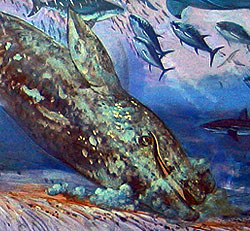 Place
It has only been found in the eastern Northern Pacific, thus far.

Description
This extinct baleen whale discovered by the San Diego Natural History Museum paleontology staff reached about 35 feet (10 meters) in body length, and had a head shape similar to that of the modern gray whale. It had a narrow, delicate, and slightly arched rostrum . It is the most common Pliocene species of baleen whale found in southern California, out of some ten species of extinct baleen whales discovered in this area.

Although the whale is as yet unnamed, Tom Deméré, Curator of Paleontology, states that this whale is related to the modern gray whale, but is not in the same genus.

Ecology
The following is information about Eschrichtius robustus , the living species of gray whale. We cannot be certain if the extinct gray whale had similar patterns of feeding, reproduction, or lifestyle.

The living gray whale, up to 45 feet (13.7 meters) long, is a bulk filter feeder with a streamlined body, tapered head, and 2-5 short grooves along the throat. Instead of teeth, like all baleen whales, the gray whale has fine keratin  tubules that hang from the roof of the mouth in cornified   plates.

With these baleen sieves, gray whales trap minute organisms by rolling to one side on the ocean floor and sucking in mud, water and tiny invertebrates from the substrate, and pressing out the water with their tongue. They are the only baleen whale that "mines" the ocean bottom in this manner. Long scours in the mud attest to their benthic foraging habits. Small crustaceans called amphipods make up a large portion of their diet.

The gray whale finds most of its food in the mud or sand of shallow sea floors, along the Pacific coastline. These whales migrate from the cold waters of Alaska and Siberia all the way to the breeding lagoons in Baja California. Heavily depleted during the intense whaling industry of the 1800s-1900s, almost to extinction, this species has since bounced back, thanks to environmental protection laws.

Gray whales are covered with a thick layer of blubber that serves to reduce drag in the water, acts as an energy reservoir to store fat, and insulates against cold water temperatures. The species is restricted to coastal areas because of its bottom feeding diet, and is found inshore or offshore in shallow continental shelf waters.

Gray whales do all their feeding in summer and fall in high latitudes, feeding heavily from May through October, storing fat reserves. During this time, the pack ice retreats, exposing the sea floor to daylight, which in turn causes a bloom of microorganisms.

During the rest of year polar feeding grounds are covered with ice, so the whales migrate to warm winter breeding grounds. During the migration, the whales fast for 6 months or so, losing about 30% of their body weight.

Breeding starts most often in late November and December during the migration south. Gestation lasts about a year. A single calf is born, weighing up to1500 pounds (680 kg).